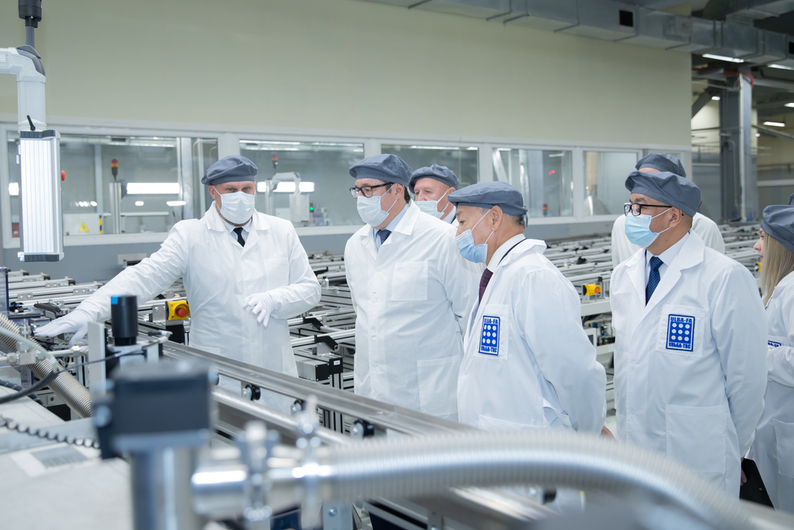 On November 10, 2021, the official opening ceremony for the new Ulba Fuel Assembly plant, dedicated to the 30th Anniversary of Independence of the Republic of Kazakhstan, was held via teleconference from the Ulba Metallurgical Plant, Ust-Kamenogorsk, Republic of Kazakhstan. Top management from Samruk-Kazyna JSC, NAC Kazatomprom JSC, UMP JSC, China Atomic Energy Authority, China General Nuclear, Framatome, and the akimat of East Kazakhstan region attended the ceremony.

“The development of the nuclear industry is a strategic direction for the Fund. Our country is interested in the production and sales of uranium products of processing value, as well as higher value added products. Successful implementation of the Kazatomprom project with foreign partners ensured entry into the limited circle of states that supply nuclear fuel for nuclear power plants,” Almassadam Satkaliyev, Chief Executive Officer of Samruk-Kazyna stated in his speech. The plant was constructed using high-tech equipment manufactured in China, France and USA to manufacture fuel assemblies (“FA”), which are engineering for the generation of thermal power inside a nuclear reactor.

“Establishment of this innovative production will allow Kazakhstan to enter the small circle of states manufacturing and supplying nuclear fuel for nuclear power plants. The project is a great example of successful multilateral cooperation of global nuclear benchmark companies. The knowledge-intensive production opens up new opportunities for our country to further develop cooperation with other states in nuclear area,” stated Mazhit Sharipov, Chief Executive Officer of NAC Kazatomprom JSC. The state-of-the-art technology of French company Framatome, one of the global leaders in fuel assembly manufacturing, was selected to be used for the Ulba-FA LLP plant.

Ulba-FA LLP has obtained a Framatome certificate confirming that the plant is authorized and capable of manufacturing AFA 3GTM assemblies with a capacity of 200 tons of uranium per year. Moreover, all requirements of CGNPC-URC, the guaranteed purchaser of the fuel assemblies, have been met, and the plant has obtained the status of being a certified supplier for the Chinese nuclear industry.

According to Sergey Bezhetskiy, Ulba Metallurgical Plant JSC Executive Board Chairman, the collaboration between NAC Kazatomprom JSC and international partners means Kazakhstan has become a supplier of an integrated service package. The project provides positive economic and social benefits for both the industry and for the country overall. CGNPC has been cooperating with NAC Kazatomprom JSC in the area of uranium mining, natural uranium sales, and pellet fabrication since 2006. The implementation of this joint fuel project propels the level of the partnership to a new historic high.

Kazatomprom is the world's largest producer of uranium, with the Company’s attributable production representing approximately 23% of global primary uranium production in 2020. The Group benefits from the largest reserve base in the industry and operates, through its subsidiaries, JVs and Associates, 26 deposits grouped into 14 mining assets. All of the Company’s mining operations are located in Kazakhstan and extract uranium using ISR technology with a focus on maintaining industry-leading health, safety and environment standards.

Kazatomprom securities are listed on the London Stock Exchange, Astana International Exchange, and Kazakhstan Stock Exchange. As the national atomic company in the Republic of Kazakhstan, the Group's primary customers are operators of nuclear generation capacity, and the principal export markets for the Group's products are China, South and Eastern Asia, Europe and North America. The Group sells uranium and uranium products under long-term contracts, short-term contracts, as well as in the spot market, directly from its headquarters in Nur-Sultan, Kazakhstan, and through its Switzerland-based trading subsidiary, Trade House KazakAtom AG (THK).

For more information, please see the Company website at http://www.kazatomprom.kz

All statements other than statements of historical fact included in this communication or document are forward-looking statements. Forward-looking statements give the Company’s current expectations and projections relating to its financial condition, results of operations, plans, objectives, future performance and business. These statements may include, without limitation, any statements preceded by, followed by or including words such as “target,” “believe,” “expect,” “aim,” “intend,” “may,” “anticipate,” “estimate,” “plan,” “project,” “will,” “can have,” “likely,” “should,” “would,” “could” and other words and terms of similar meaning or the negative thereof. Such forward-looking statements involve known and unknown risks, uncertainties and other important factors beyond the Company’s control that could cause the Company’s actual results, performance or achievements to be materially different from the expected results, performance or achievements expressed or implied by such forward-looking statements. Such forward-looking statements are based on numerous assumptions regarding the Company’s present and future business strategies and the environment in which it will operate in the future. THE INFORMATION WITH RESPECT TO ANY PROJECTIONS PRESENTED HEREIN IS BASED ON A NUMBER OF ASSUMPTIONS ABOUT FUTURE EVENTS AND IS SUBJECT TO SIGNIFICANT ECONOMIC AND COMPETITIVE UNCERTAINTY AND OTHER CONTINGENCIES, NONE OF WHICH CAN BE PREDICTED WITH ANY CERTAINTY AND SOME OF WHICH ARE BEYOND THE CONTROL OF THE COMPANY. THERE CAN BE NO ASSURANCES THAT THE PROJECTIONS WILL BE REALISED, AND ACTUAL RESULTS MAY BE HIGHER OR LOWER THAN THOSE INDICATED. NONE OF THE COMPANY NOR ITS SHAREHOLDERS, DIRECTORS, OFFICERS, EMPLOYEES, ADVISORS OR AFFILIATES, OR ANY REPRESENTATIVES OR AFFILIATES OF THE FOREGOING, ASSUMES RESPONSIBILITY FOR THE ACCURACY OF THE PROJECTIONS PRESENTED HEREIN. The information contained in this communication or document, including but not limited to forward-looking statements, applies only as of the date hereof and is not intended to give any assurances as to future results. The Company expressly disclaims any obligation or undertaking to disseminate any updates or revisions to such information, including any financial data or forward-looking statements, and will not publicly release any revisions it may make to the Information that may result from any change in the Company’s expectations, any change in events, conditions or circumstances on which these forward-looking statements are based, or other events or circumstances arising after the date hereof.