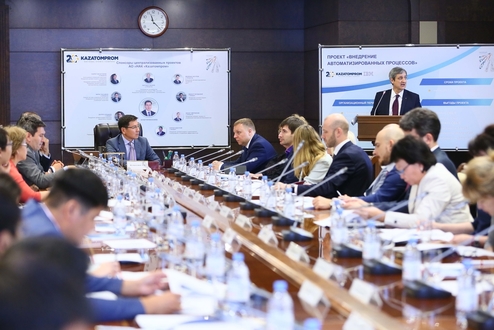 SAP ERP Project (enterprise resource management system) was launched in NAC Kazatomprom JSC under the Transformation program. The event was attended by Askar Zhumagaliyev, Chairman of the Management Board of Kazatomprom, representatives of Samruk-Kazyna JSC and IBM company, which will implement the system.

“Kazatomprom today already uses a number of IT instruments, among which, for example, Situation Center, Integrated Planning System and others. The current ERP project will take its important place in the system of company’s IT solutions. The system will give us opportunity to make the right decisions, correctly solve vital issues for enterprises. As part of the transformation in the Samruk-Kazyna Fund group of companies, we are the first to embark on the implementation of one of the largest projects in Kazakhstan. We are proud of it and at the same time understand the level of responsibility,” - said Askar Zhumagaliyev, the Head of Kazatomprom, during the event.

Team of 200 persons – employees of Central office and regional companies carries out the project on implementation ERP system in  Kazatomprom.

“All employees of the project teams already work on design of future system,  analyze the compliance of business processes implemented in ERP to target models, and also work on integrating the future system with the systems built under other projects (Digital Mine, Integrated Planning System, Situation Center and others). In two years we are planning to get a system in which all the main business processes will be automated, more than 1,700 users of all enterprises included in the perimeter of the project will work in it,”  - said Valery Tokarev, Director of the Business Transformation Department of NAC Kazatomprom JSC.

“The ultimate goal of any such automatization is to understand the situation in the enterprise and obtain an instrument that will allow us to make optimal and fast decisions supported by actual digitized data,” - Miras Kasymov, the Acting Chief Transformation and HR Policy Officer of NAC Kazatomprom JSC.

In 2017, the ERP system is planned to be implemented in the corporate center of Kazatomprom and in Kazatomprom-SaUran LLP. In 2018, the system will be launched in RU-6 LLP, Ortalik LLP, TTK LLP and UMP JSC.